In my talk “Interventionen. Produktive Störung und Kommunikationsanlass” at RWTH Aachen (May 13)  I presented my thoughts on walking as means to creatively disturb everyday practices. RWTH is working together with the City of Aachen on a walkability-project and focussing on urban interventions to tackle the associated transformation of public space. Referring to my own research on Walking as Design Research and practical experiences, e.g. with the ongoing project “Paths create Landscapes” in Munich´s Greenbelt, I came up with the recommendation to intervene in the public realm by diverting and instructing walking people and thus point to new ways of appropriating the city as walkscape. (Drawing: Börries v. Detten) 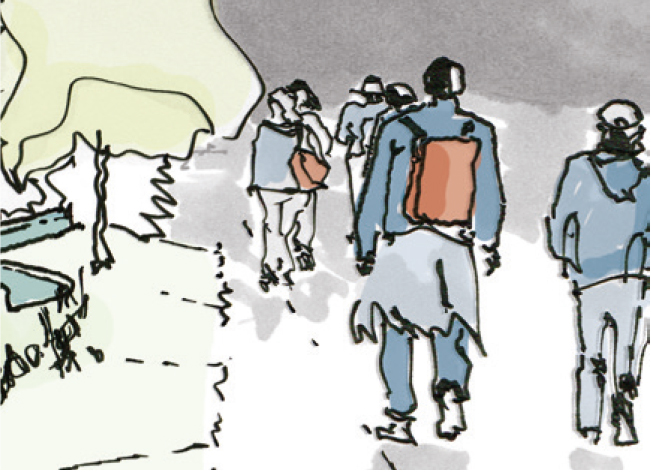 END_OF_DOCUMENT_TOKEN_TO_BE_REPLACED

My talk on walking, pathmaking and landscape design is online.

END_OF_DOCUMENT_TOKEN_TO_BE_REPLACED

In my talk „Das Land als Sphäre der Verortung einer multilokalen Gesellschaft?“ during the conference “Gutes Leben auf dem Land” (July 5, 2018) I presented my thoughts on new interdependencies between urban and rural spaces initiated through new forms of being “en route”. I understand multilocality as a result of structural necessity, action capacity and living strategy (Dick et al 2014) and follow Nicolas Bourriauds definition of mobile people as radicant. “To be radicant means setting one´s roots in motion, staging them in heterogeneous contexts and formats, denying them the power to completely define one´s identity, translating ideas, transcoding images, transplanting behaviors, exchanging rather than imposing”(Bourriaud 2009). Transferring this to the question of rural-urban relation I say: Complex patterns of movement between urban and rural places should be understood and designed as a play of affiliation and detachment.

END_OF_DOCUMENT_TOKEN_TO_BE_REPLACED

Learn more about the walking workshops, Henrik and Börries did in Munich´s greenbelt!

END_OF_DOCUMENT_TOKEN_TO_BE_REPLACED

How can we sustainably transform cities? How could a landscape strategy look like? Henrik will present his findings on co-creative, strategic approaches in the session „Building sustainability“ at 2018 Urban Future Global Conference in Vienna. In this context he will present the brand new broschure of the project „Perspektivplan Freiburg“, together with Oliver Seidel, cityförster.

Lern more about the conference! END_OF_DOCUMENT_TOKEN_TO_BE_REPLACED

I presented the findings from our project “Concept for paths and landscape perception in Munich’s greenbelt” at the LASIE-Congress. Walking the green belt with different groups of stakeholders revealed talents and challenges. Walking Workshops helped to understand different types of paths and associated landscape perceptions. Project together with Börries v. Detten, freiwurf. END_OF_DOCUMENT_TOKEN_TO_BE_REPLACED

Last Friday I sent twenty participants of the LEAD Academy on their ways to explore their innovation strategies while walking Berlin. The newly formed Office For Applied Intuition (OFAI) ran a training course “Intuition+Ratio=Innovation”. I designed and facilitated walks fostering movement as crucial part of innovation processes. “One of the most inspiring trainings I´ve ever joined” said a team leader. Learn more about the OFAI here.

END_OF_DOCUMENT_TOKEN_TO_BE_REPLACED

On May 16, 30 people from the North of Munich met 30 international landscape experts from “LeNotre Landscape Forum” and walked Munich´s open spaces together. I came up with a route and introduced a set of rules (to walk in silence, to keep ten steps distance…) to inspire an intense engagement with the urban landscape. The reflection after the walk brought up relevant questions that should be addressed when designing the green spaces at Munich´s urban fringe. The walking workshop was the first of a serious of guided walks and part of the design study “Landschaftsbezogene Wegekonzeption für den Grüngürtel München” carried out by Börries v. Detten and me.

END_OF_DOCUMENT_TOKEN_TO_BE_REPLACED

Read my article “Identifying particular places through experimental walking” online and send me your thoughts!

END_OF_DOCUMENT_TOKEN_TO_BE_REPLACED

On April 20, in Leuven, Belgium, I presented my experiences with successful co-creative planning projects to researchers and project developers of the Department Omgeving of Vlaanderen – and we had a great discussion on the role of walking, engagement and metaphors in those projects. It became clear that it is crucial to creatively implement the European Landscape Convention searching for ways to understand landscapes “as areas as perceived by people”. It´s a great chance to bring regional landscape planning alive.